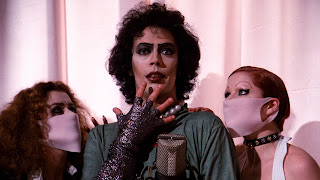 Once I moved my cult movie cabaret show, initially called The Midnight Lounge, from Saturdays to Thursdays and rechristened it Thrillville, since for my aging lounge lizard ass 9pm was the the new midnight, The Parkway began contemplating the possibility of a new weekly midnight movie show, something that would draw people out to that neighborhood at that time of night on a consistent basis, something with a built-in, rabid following, something with more youthful appeal...Naturally The Rocky Horror Picture Show, the raunchy rock 'n' roll monster musical whose legend had never stopped growing since it premiered in 1975, immediately and pretty much simultaneously sprung to everyone's minds.

I suggested we meet with Barely Legal Productions, the live troupe that recently ended a long, successful run at Berkeley's beloved UC Theater, due to the fact the beloved institution had sadly closed. Nate Havoc and his future bride Bridgid McGuiness (now Bridgid McHavoc!) totally sold us on the viability of such a prospect, and indeed, The Parkway's cavernous, classical lower theater was the ideal venue for a live stage show accompanying the most popular midnight movie of all time. It offered the same darkly cozy, spacious comfort as the UC, but with sofas! I remember seeing the show at the Nuart Theater down in West L.A. years before, where it also enjoyed a lengthy run, but Barely Legal was, and remains, the world's best. 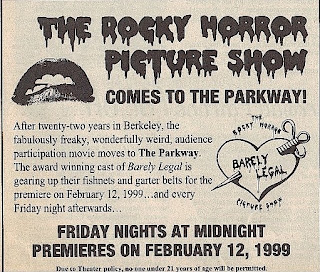 Barely Legal performed their sexy, spectacular stage show (with the movie) week in, week out to large, loyal crowds, all too anxious to participate in the merry madness, beginning on February 12, 1999, continuing through to their final show at The Parkway on March 21, 2009, the day before yet another unique community movie theater went prematurely dark. Nate and his talented crew often hosted our annual Oscar parties as well, putting on elaborate musical numbers and inventive comedy skits during the commercials (I also hosted The Parkway's Oscar gigs, begrudgingly - more on that later). We were very fortunate to have them as an integral part of The Parkway's identity. They really helped make us special.

After many successful "road shows" around the Bay Area and beyond, Barely Legal plans to resume Rocky shows at The New Parkway, which will become a whole new tradition. Talk about a "Time Warp." Virgins beware....Cheers.