"The Parkway News": blast from the past (28 days until opening) 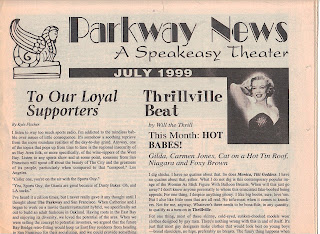 Back in the day, meaning the previous century, when the Parkway Speakeasy Theater opened in January 1997, Al Gore had already invented the Internet, but not as many people had access to it as they do now, with iPhones and iPads and iWTF ubiquitous in our society, and all kinds of information easily accessible literally with the touch of a button. So it was much harder to get the word out about this unique theater. My first duty at the Parkway was hosting and programming my weekly live cult movie show, "The Midnight Lounge," which eventually morphed into Thrillville. But before I was appointed full time programmer/publicist, I also worked briefly as a ticket taker at the box office, and as a paperboy - literally. I already had the training from when I delivered the Philadelphia Inquirer and Atlantic City Press while growing up in South Jersey. But this time, my involvement with the media for which I served as messenger was a bit more proactive and creative... 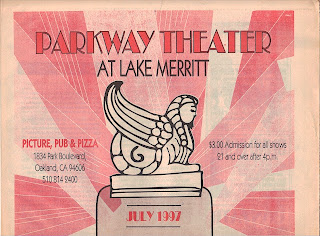 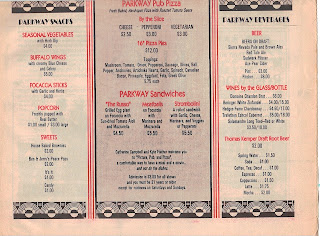 Kyle had decided to publish our very own newspaper! The Parkway News debuted as a very thin, four-to-six page tabloid-style publication in the summer of 1997, shortly after we opened, then eventually grew into a full sized, full blown monthly newspaper. Kyle wrote many of the film reviews and a regular column, called "To Our Loyal Supporters." For someone who didn't consider himself a writer per se, he was very witty and customers really responded to his colorful use of the language. As for me, the "professional" writer, I was given my own column to promote myself as "Will the Thrill." I also became Editor-in-Chief while Kyle remained the Publisher. It was very much an ensemble effort. I have many memories of the entire staff sitting around the theater lobby, stuffing advertising inserts into the thousands of papers. And of course, I was the designated driver - delivery man, that is, picking up the bundles of monthly papers from the printer and distributing them around the East Bay at cafes, restaurants, bars, clubs, stores and any local venue that would have us. Mostly, people picked them up at the theater. The papers featured the regular columns, special articles, film reviews, our menu, and a calendar that was hardly ever accurate since when it came to the second run fare, our daily bread and butter, we could only guess what movies we'd be playing any given week. 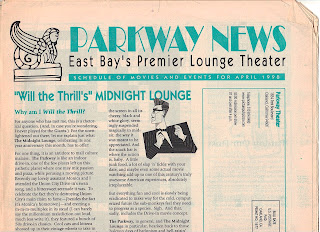 This brings up a crucial bit of business: "second run" refers to movies that have already completed their first runs at local theaters in the designated district, decided collectively by the film studios. In our case, we were subrun to the Grand Lake Theater, Jack London Cinemas, and the joint that booked and hung onto our most coveted product, the Piedmont. This means as long as they decided to show these movies, we could not. As the programmer, it was difficult for me to explain this to frustrated patrons anxious to see movies before they came out on DVD (or back then, VHS). This will also be the challenge at The New Parkway, which is subrun to the same three venues. The trick is making it worth the wait, and augmenting the new movies with special events. 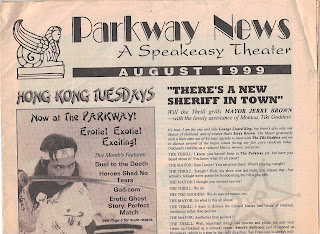 You'll get a taste of some of this specialty programming by checking out these scans of old issues, as well as some feature articles like my interviews with former Oakland Mayor Jerry Brown and the late KTVU Creature Features host Bob Wilkins, who later made several personal appearances at my Thrillville gig. Due to high layout/printing costs and our increasing dependence on something called a "web site," The Parkway News ceased publication in December 1999. It was a unique piece of the theater's history. I'm sure The New Parkway's media methodology will be much more sophisticated and contemporary....but it looks like I still have a column! Funny. Weird. Dig. Cheers. 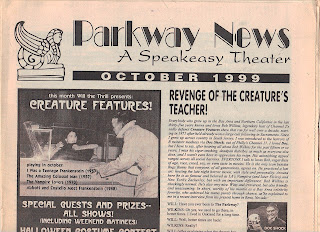 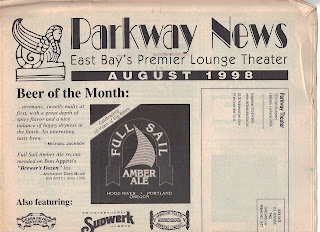 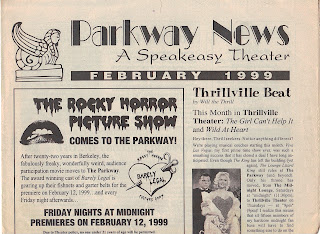 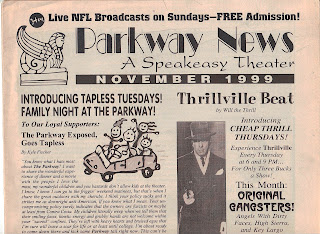 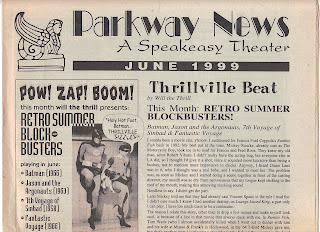 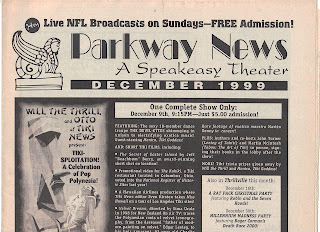 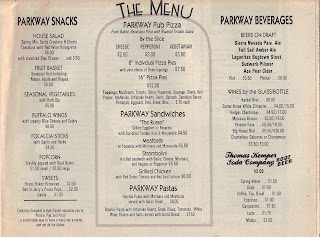