The Parkway Begins, and Thrillville Rises (30 Days to Opening) 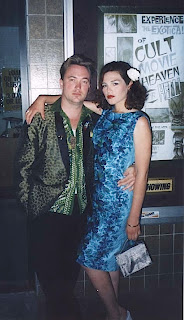 I was the proud programmer/publicist for the Parkway Speakeasy Theater for twelve years, though patrons knew me better as either "the white guy in the Parkway video" or as "Will the Thrill," host/producer/programmer of my live cult movie cabaret, "Thrillville." Initially, Speakeasy CEO/co-founder/entertainment lawyer Kyle Fischer asked me, their movie geek friend, to create and host a weekly midnight movie show, primarily to promote the novel of mine, he and his wife, Speakeasy Theaters president/mastermind/chef Catherine Fischer, had published with their small publication company, Wild Card Press (which has since folded, along with Speakeasy Theaters.) The book was called Love Stories Are Too Violent For Me, the first in my Vic Valentine, Private Eye series, and it's since been optioned for a movie by Christian Slater, with production finally on the fast track. The Parkway opened in January of 1997, and I hosted my first live show - initially called "The Midnight Lounge," every Saturday at midnight (or technically, Sunday), beginning with the David Lynch classic, Blue Velvet, in April that same year. 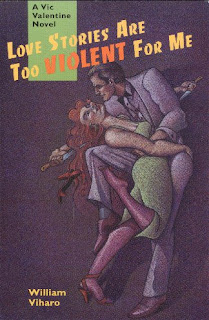 My public persona as "Will the Thrill," a neo-lounge lizard with retro tastes and style sensibilities, was somewhat inspired by Jerry Lewis's character "Buddy Love" in the original version of The Nutty Professor (1963).  However, as time went on, I eventually just played a broader version of myself, totally improvising, choosing my personal favorite cult movies, so it was like a big party at my house, except I didn't have to clean up afterwards.  I showed a lot of movies initially released by American International Pictures and then available via the now defunct distributor "Kit Parker", all in 35mm, from 50s monster/JD flicks like How to Make a Monster, Reform School Girl, The Cool and the Crazy, Invasion of the Saucer Men, and It Conquered the World, to '60s druggie/biker flicks like The Trip, Wild in the Streets and The Wild Angels, to '70s blaxploitation like Coffy, Cleopatra Jones and The Mack.  It was fun, though crowds were scarce until we switched the show to "prime time" on Thursday nights, selling out the house with Viva Las Vegas, my first "Elvis B-day" show at the Parkway, on January 8, 1999.  When I began adding bands and burlesque acts to the lineup, the show, now re-christened "Thrillville," took on a life of its own.  I put my literary career on pause, until the Parkway closed unceremoniously and with only four days' notice (even for me) on March 22, 2009 - William Shatner's birthday. 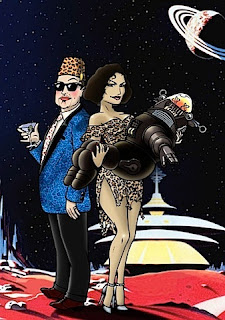 When I first started hosting the show, my "lovely assistant" was my first wife, who will go unnamed. As you all know, the Parkway served beer along with wine, pizza, etc. My first wife was in AA. Let's just say neither the marriage nor the gig lasted very long....So I began auditioning new lovely assistants by selfishly selecting a sexy female audience member to spin the big carnival wheel that became a staple of the show, and to help me give out prizes, which consisted of a few valuable donations from local merchants (but mostly kitschy crap from my house I grabbed on the way out the door).  On May 31, 1997, at my midnight screening of Jailhouse Rock, I called up the hottest babe in the small crowd to the big stage, as usual, and it happened to be one Monica Cortes, Elvis's #1 fan. She showed me her Elvis/Navajo tattoo on her lower back, and, well, she left an impression. I gave her an Elvis blanket for her efforts...Then months later, while hosting an Elvis B-Day Party at the Ivy Room in Albany on January 8, 1998, who should walk in to the party....yada yada yada, on May 31, 2001, Monica Cortes, by then locally famous as my regular lovely assistant "Monica Tiki Goddess," became Monica Viharo at our Rat Pack-mariachi wedding ceremony at the Ca-Neva Lodge in North Tahoe, formerly owned by Sinatra. Suffice to say, she got both gigs.

Naturally, this is my favorite Parkway memory, since I'm still reaping the dividends. Since then, many other couples have mated and sometimes married after meeting at The Parkway.

I'll be recounting many more memories of "Thrillville" and the Parkway in this blog, daily for the next 30 days, counting down to the grand opening of The New Parkway on Friday, November 30, 2012. I am proud to be serving as their publicist/special events consultant. Though now busily employed as a freelance writer and novelist, I'll be programming two regular repertory shows a week, "Parkway Classics" on Thursday nights, beginning with The Big Lebowski on December 6, and "Thrillville Theater"on Sundays, kicking off with Forbidden Planet on December 2, both former crowd-pleasing favorites at the "old" Parkway.  I don't plan to host any more shows, except for an occasional "Shatfest" (my popular annual tribute to Shatner), but more on what we do have in store for you later. Don't worry, you'll love it.

The moral of this particular story? Get off your butt and go out for dinner and a movie at The New Parkway. You never know who you're going to meet there. A random encounter may just change your life.  Cheers. 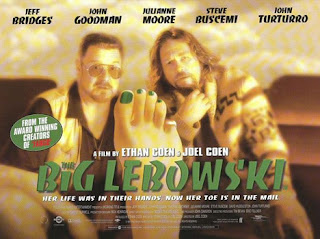 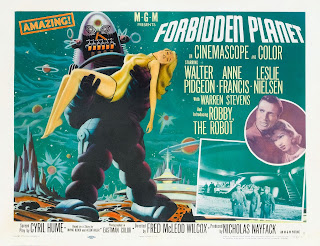 Email ThisBlogThis!Share to TwitterShare to FacebookShare to Pinterest
Labels: Monica Tiki Goddess, The New Parkway, The Parkway Speakeasy Theater, The Parkway Theater Oakland, Thrillville, Will the Thrill, Will Viharo