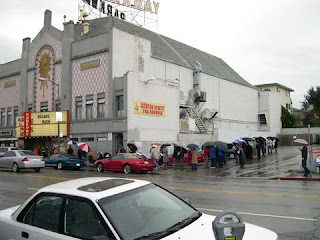 Beginning in 1999, The Parkway began broadcasting the Academy Awards on both big screens, throwing our own customized, eccentric and insanely popular annual Oscar Bash.  For the price of a single admission, we offered free passed finger foods, champagne, a goodie bag, and live entertainment during the commericals.  At first it was just me as "Will the Thrill" and my lovely assistant (and eventual bride) Monica, Tiki Goddess hosting the festivities, running up and down the stairs, trying to quickly give away trivia/contest prizes while barely stopping to catch a breath. It was quite a workout. And Monica always wore high heels... 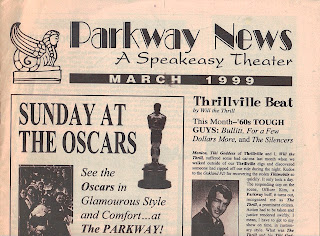 Finally, and fortunately for all concerned, our talented in-house troupe Barely Legal Productions, who presented The Rocky Horror Picture Show at the theater every week, took over the downstairs auditorium during the Oscars with elaborate musical stage shows and themed skits performed during the commercial breaks, while I was upstairs doing my vintage smartass lounge lizard schtick to a far less boisterous crowd. Basically it was like going to a Vegas casino with Cirque du Soleil playing the big room and Louis Prima and Keely Smith swingin' in the lounge. Always nice to have options. Same show on the screen, anyway.

The Oscar Bash was one of our popular events, with advance tickets selling out seemingly within minutes of going on sale, year in, year out. Patrons dressed up for the various contests, including Most Glamorous ,Best Celebrity Lookalike, and my personal favorite, Best Cleavage. A grand time was had by all. Except for me. I hate the Oscars. IMO, movies should never be reduced to sporting events. But then I also hate sports and The Parkway also hosted annual Superbowl Parties (which I skipped, but nobody missed me, I'm sure). 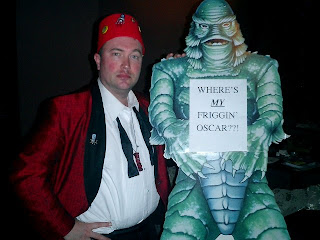 I hosted the Oscar Bash for many years because the audience was having so much fun and I considered the gig an extension of my Thrillville  responsibilities. But don't worry. I won't be showing for the Oscar parties at The New Parkway with my grumpy attitude. I'll be at home, watching movies that would never be remotely considered for any kind of award - none anyone would would be proud of, anyway. But you folks will have a blast! Let me know how it goes...Cheers.