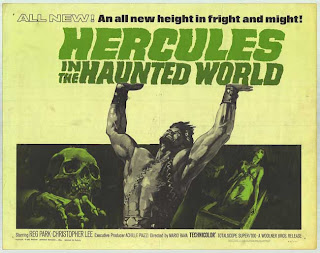 Bill Longen, who later went on to work as special events manager for the Castro Theater, and was formerly an editor for KTVU, is a good friend and film collector from whom I scored many rare prints for The Parkway, both vintage trailers and classic feature films, but mostly trailers. We called him "Uncle Bill, the Trailer King." I met Bill during one of my popular Creature Features reunion shows with Bob Wilkins and John Stanley, since Bill actually worked on that series (more on those gigs later.) Bill is a great guy and a fellow movie buff, and he supplied Thrillville with many memorable movies over the years that I could not have shown otherwise, since in many cases, he owned the only existing prints. His stash was amazing. 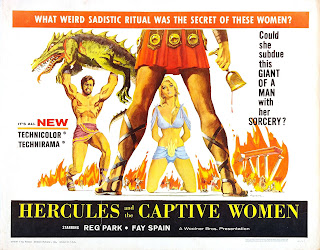 For instance, once I booked his 35mm print of Mario Bava's 1961 sword-and-sorcery classic Hercules in the Haunted World. Or so I thought. Indeed, the first and last reels were from this movie, which starred Reg Park as the mythological macho man in one of the best films in that series. However, at some point, long before Bill acquired the print, some probably pimply-faced projectionist way back in the day mixed up this print with another Reg Park Hercules movie from the same year, Hercules and the Captive Women, inserting the middle three reels from this movie! They probably played on a double bill. But now they were mashed up into a single senseless flick! (Not that these lovable but loony Italian B movies were all that logical, anyway....) This meant Hercules (fortunately played by the same actor, at least) inexplicably went from Hades to Atlantis and back again, with no structural continuity whatsoever! Fortunately, my audience by then was accustomed to such screw-ups, so either nobody noticed, or nobody cared. We won't be able to duplicate this accidental magic at The New Parkway, and that's probably a good thing...Cheers.

Email ThisBlogThis!Share to TwitterShare to FacebookShare to Pinterest
Labels: Hercules, The Parkway, The Parkway Oakland, The Parkway Theater, Thrillville