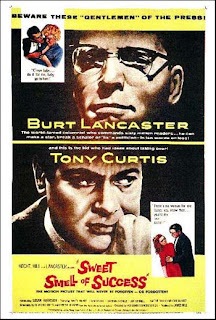 When The Midnight Lounge morphed into Thrillville in January of 1999, successfully moved from an increasingly barren Saturday midnight slot to Thursdays during "prime time," I would theme each month's worth of movies. In April of that year I programmed my very first film noir festival, featuring my four favorite exponents of the genre: Sweet Smell of Success (1957), Kiss Me Deadly (1955), Out of the Past (1947), and White Heat (1949), plus my friend Eddie Muller's favorite, In a Lonely Place (1950).  I also asked Eddie to co-host the films with me. Eddie's benchmark book Dark City: the Lost World of Film had just come out, and he was already on his way to becoming world renowned as the "Czar of Noir." I wrote up a comprehensive, two page spread interview with him for The Parkway News (our old publication, read more about that here), which I called "Two White Guys Sittin' Around Talkin' Noir," and we displayed some of Eddie's rare film noir posters in our lobby (Eddie later published his collection in a coffee table book called The Art of Noir). 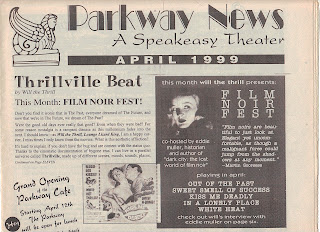 The series was so successful that I programmed five more annual film noir festivals at The Parkway, one every fall, mixing in well-known favorites like The Maltese Falcon, The Big Sleep, Mildred Pierce and Gilda with lesser known but no less essential classics like Murder My Sweet, Born to Kill, The Lineup, The Sniper, and Screaming Mimi, along with neo-noir masterpieces like Point Blank, Chinatown, Body Heat, and The Long Goodbye. Eddie often returned to co-host, too. Kelly Vance of the East Bay Express always devoted a column to them, so they were good for publicity purposes as well. 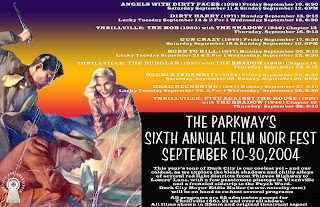 Since The Parkway was not equipped with the "reel to reel" change-over projection system necessary for exhibition of the more obscure archival titles (more on that here), I arranged an awkward but acceptable workaround wherein the projectionist would not cut these precious prints, but splice the reels together using the "leaders," meaning the audience was privy to that weird "count down" footage inserted at the top of every reel, sometimes including those notorious "pinup" inserts (as seen in Grindhouse). The patrons were typically gracious, often joining in the count down, and I was able to book fairly eclectic noir festivals (as well as various B movies), showcasing both famous and fringe titles. I was very proud of this programming, and audiences were initially appreciative, but seemed to dwindle over the years... 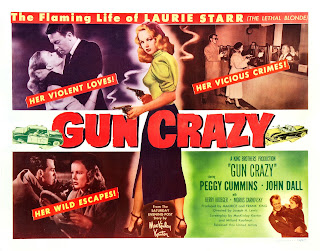 The final straw was when I booked the 1947 classic Gun Crazy in the downstairs theater on a Friday night, and only about 25 people showed up to behold a beautiful print of a rarely screened title. Meanwhile, Harold and Kumar Go to White Castle was playing to a sold out house in the upstairs theater. Also by then, Eddie had begun hosting his now legendary annual Noir City festivals at the Castro Theater in San Francisco, which often sold out that 1400 seat palace. I got the message, and only occasionally, and selectively, booked noir films in Thrillville after that.

I plan on booking more film noir at The New Parkway, though it will be all digital projection (which actually increases the programming possibilities.) Hopefully noir fans will show up in droves like they once did at The Parkway. But if not...hey, that's noir. Cheers.
Posted by Will Viharo at 12:22 PM