Some of my favorite memories of The Parkway are when my friend Ray Dennis Steckler appeared in Thrillville and literally took over the show. Ray is famous amongst cult movie fans for such grindhouse gems as The Incredibly Strange Creatures Who Stopped Living and Became Mixed-Up Zombies (1963), The Thrill Killers (1964), Lemon Grove Kids Meet the Monsters (1965), and Rat Pfink a Boo Boo (1966), all of which I proudly presented with Ray in person over the years. He would haul his own 35mm prints to the Bay Area from his home in Las Vegas, where he ran his own video store. He even made professionally edited, full length documentaries about these live shows which he sold, inserting vintage film clips into the footage he shot at The Parkway as well as the shows we did at the Fine Arts Theater in Berkeley, also sadly defunct. Ray loved to meet the fans and always regaled audiences with long-winded but riveting tales of guerilla filmmaking back in the day. He was a true independent, long before that designation became trendy. He often brought special guests like frequent co-star Herb Robins, who was hilarious, and his old editor Keith Wester, who went on to an Oscar-nominated career. 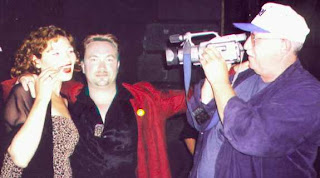 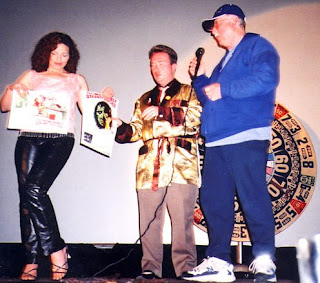 My biggest pleasure was chasing Ray around the theater during a screening while wearing one of his original "Mummy" outfits, waving a plastic axe, and Ray donned the trademark hoodie of his cinematic alter ego, "Cash Flagg." During one of our most successful gigs together, Valentine's Day with Ray Dennis Steckler on February 14, 2002, my friend Mick Turpel of Barely Legal Productions and I were chasing Ray through the screaming audience in a sold-out house as Incredibly Strange Creatures was playing - and the fragile film suddenly snapped. Ray got up on stage and said jovially, "Story of my life!" Then he entertained the folks with more crazy true stories while the projectionist taped the frail print back together. This happened a couple of more times that night, too. One of my very favorite nights at The Parkway.

Sadly, Ray passed away on January 7, 2009 - the same exact day as another Thrillville/Parkway regular, Creature Features host Bob Wilkins. The irony was bitter and seemingly foreshadowed the abrupt closing of The Parkway only a couple of months later, on March 22, 2009. The sudden, complete end of an era.

I donated the 35mm prints Ray had left with me, Incredibly Strange Creatures (under its alternate title, Teenage Psycho Meets Bloody Mary) and The Thrill Killers (also under its alternate title, The Maniacs Are Loose) to the Pacific Film Archive in Berkeley, where they will be preserved for posterity. To my knowledge (and Ray's), no other 35mm  prints of these classics exist.

So my pal Ray won't be appearing at The New Parkway, except in spirit. Here's to the other Bob and Ray. Cheers. (Watch Ray's "documentary" of his first show at The Parkway from August 2000 here, and of his epic Valentine's Show at The Parkway here.)
Posted by Will Viharo at 12:40 PM